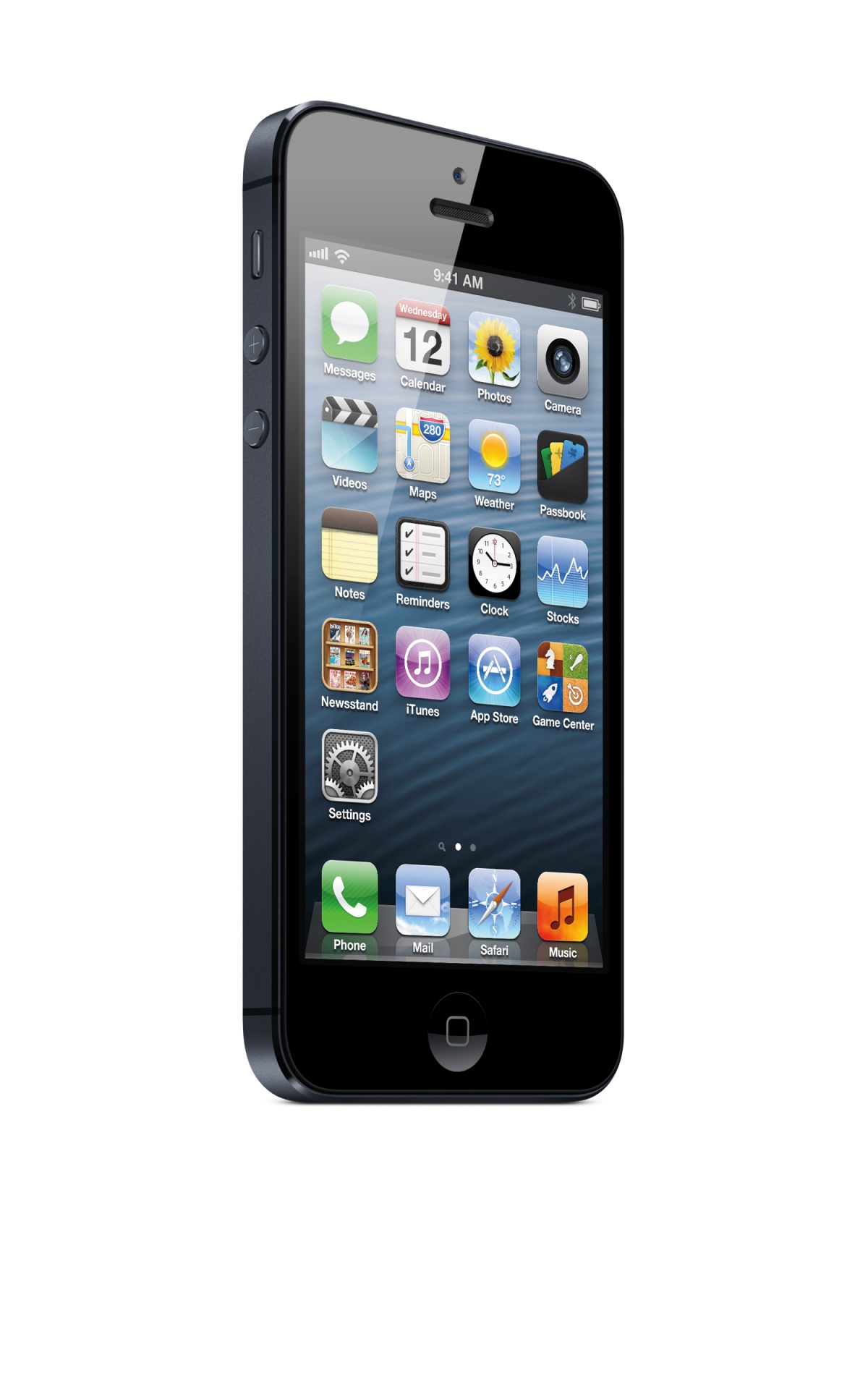 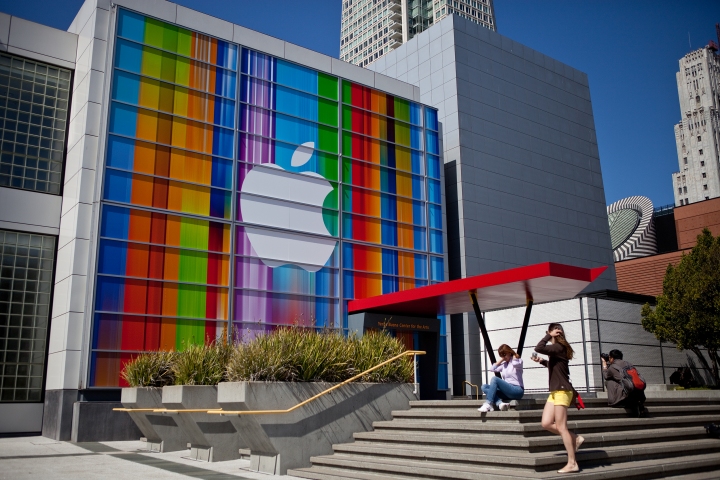 It’s iPhone time again! We’ve been through what we expect from the event, but there’s always the chance that Tim Cook will spring a few surprises on us, so check back here from 1PM EDT/5PM GMT/6PM BST for all the latest news!

All times given are BST. This liveblog has now ended.

16:55 Things should kick off in just over an hour.

17:00 Liveblogging today we have Xavier Voigt-Hill and maybe Henry Hunt.

OH GOD WHAT IF THEY CALL IT THE iPHONE FIVE ALL SPELLED OUT AND STUFF LIKE NOT WITH A NUMERAL?

17:44 Nobody’s inside the Yerba Buena Center yet, so things might be a bit late.

17:50 Theoretically my internet connection could be faster, but Community needs to download. Community > iPhone.

17:52 And everyone is inside! This could start on time after all.

18:15 Entirely glass and aluminium. It is the thinnest and lightest iPhone at 7.6mm. The world’s thinnest smartphone. Eat that Razr.

18:19 Black bars on either side for existing apps that haven’t been updated for the 16:9 screen.

18:27 Rob Murray from Firemonkeys is showing off Real Racing 3.

18:41 Here’s a dock connector adapter. This thing is tiny.

18:43 Demoing the new non-Google maps. We’ve already looked at what this all means.

18:47 Now Forstall is showing off Passbook and Siri stuff. No sign of NFC though.

18:51 My internet just died, but I’m alive. Siri can tell you sports scores, good movies and Facebook for you.

18:53 And now we are wrapping up with a Jony Ive video. It comes in white too.

19:02 iOS 6 coming to iPhone 4 and later on September 19th for free. iPod Touch 4th generation is included in this.

19:14 iCloud is now built into iTunes for syncing film positions and stuff.

19:16 New iPod Nano is 38% thinner at 5.4mm and has a widescreen multitouch display, physical buttons and a Lightning connector. And a home button.

19:28 5MP rear iSight camera actually takes good photos. I might need one of these things.

19:30 Push something on the bottom and a lanyard strap holder thing appears, like on cameras and some phones.

19:33 Five colour choices too, each with its own loop thing.

19:38 iPod pricing. New ones are coming in October.

19:41 High resolution iPhone 5 for you via TNW. Click for a bigger view.

19:47 That wraps things up. It’s been a massive night, and I hope you’ve enjoyed it. Goodnight! 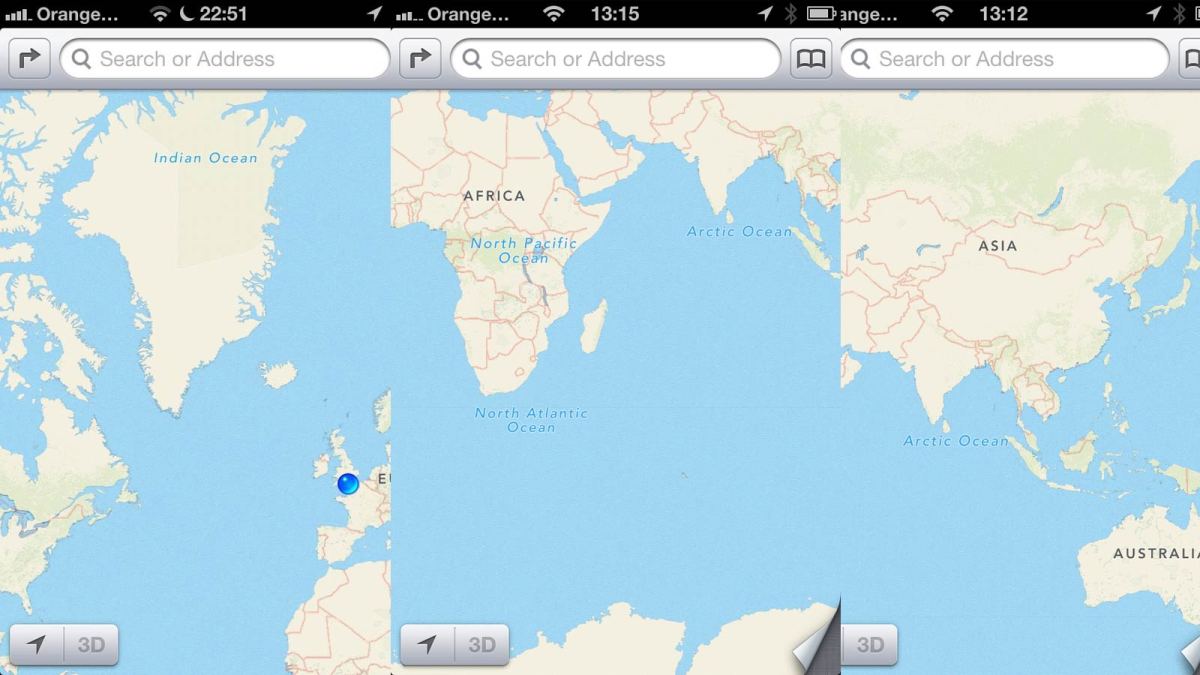 Apple has announced that it will be removing Google Maps from its native application in iOS and will be replacing it with its own mapping system with the upcoming launch of iOS 6 this autumn for iPhone 3GS onwards, iPad 2, iPad (3rd generation) and iPod Touch (4th generation). It will include its own high quality 3D mode, and by all accounts it does pretty much exactly what Google Maps did, only in an interface that Apple think is far superior. 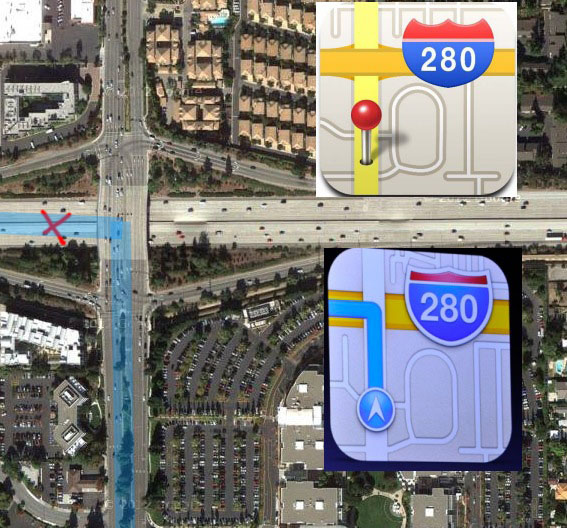 In the mean time, Google has been developing their own software on Android and both companies have been reported to have used fleets of planes that have ruffled the feathers of some privacy campaigners who complained having noticed an increase in airspace activity while tracking the movements of several large companies. Apple are set to create yet anouther easy to use and beautful app that will undoubtedly do its job very well. It is another example of Apple showing that making their products integratable with existing platforms is not the only field they are improving, but also the Apple universe that will one day probably be able to exist independently to every other system of computing there is. My concern is that Google has such a solid base, and with a single account you can connect all of Google’s existing services such as Gmail, Drive, YouTube and +, making them easier to use and more efficient for the user. That said Apple have added mapping support to Siri, the “eyes free” system which Apple is rumoured to have been working on with car manufacturers to develop add buttons for in new cars, allowing for a hands free, voice activated GPS and phone.

I think that Apple’s new mapping system will be good because things that come out of Apple are generally well received and the response by Google will probably improve on what they have now, which can only be a good thing for map users. If users wish to return to using Google Maps or use a different platform entirely, they should have the option to do it through the App Store, as there are a number of map apps available for the platform. Apple’s eyes free integration, however, is very promising, and it is very probable that it means Google Maps is on its way out for many Apple users. Apple’s initiative has yet again shown the company’s ability to remake everything in the image of their own minds. 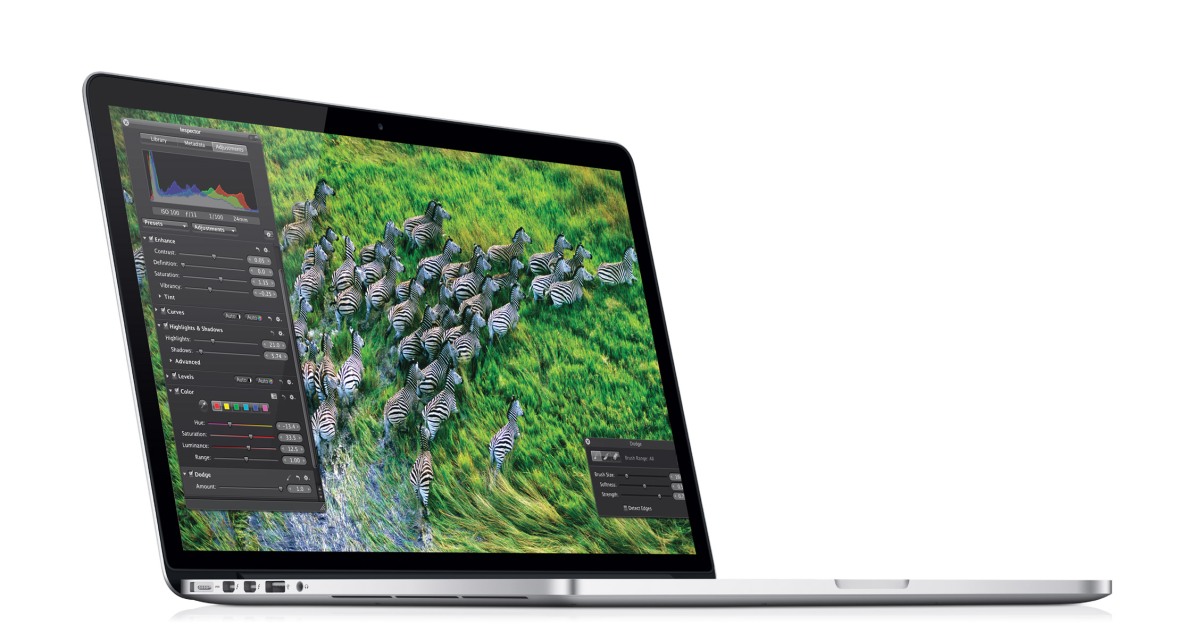 That screen sounds absolutely incredible.
You can talk to iPads.
USB 3.0 is now infiltrating.
Nobody likes massively oversized laptops.
Siri likes fridges, mocks Samsung.
Open Monsters Ate My Condo.
The Mac Pro isn’t dead!
Why did you expect iPhones?
Maps are the way forward.
Apple will survive without Steve.
FaceTime over cellular is pointless.
Want Ivy Bridge with that?
Sharing from notifications is egotistical.
Facebook is still a thing.
At least Ping is dead.

Techslice is a column by Ali Wilson. Views expressed are not necessarily those of Digixav.

In October 2011, Apple released their latest iPhone: the iPhone 4S. A lot of people were disappointed with the result that came 18 months after the 4 and were expecting something a bit more, well, new. By sight, the iPhone 4S is the same as its predecessor, the iPhone 4. The only major differences for a year of development were a dual-core A5 processor from the iPad 2, Siri and 3 additional megapixels in the camera.

So with so few differences in the last upgrade, we are expecting great things from the iPhone 5/iPhone 4G/iPhone 6/new iPhone. There has been a concept design released and, as you can see, it does look very different to the previous model.

Straight away, the first thing we notice is potential design overhaul of the new iPhone. Apple may reverted towards their old curved design from the original models. The shape is a lot less square and is much more rounded, a lot like the new Samsung Galaxy S III. The screen size may increase from the current 3.5″, with rumours circling that Apple may enlarge it to a whopping 4.8″, although Steve Jobs would turn in his grave. He was in staunch opposition to larger screens as he (rightly) thought that they made the iPhone resemble an Android phone.

The sixth installment to the iPhone series is said to be being released just over a year after its older brother. It was thought that if it was released earlier, then the new iPad’s sales would not be as high. Apple have therefore left a six-month gap between the iPad and the iPhone’s release. It is rumoured for early October 2012.

So, if you’re thinking of investing in an iPhone 4S, think again. It should be worth the wait of (potentially) just six months, because Apple could change everything. Again.

We’ve reported on Apple’s iPhone 4S advertising before, so when we spotted some new ads on the internet that were showing off Siri, we knew you needed to see them. One of them even has Zooey Deschanel in the rain. The other has Samuel L. Jackson looking for organic mushrooms . 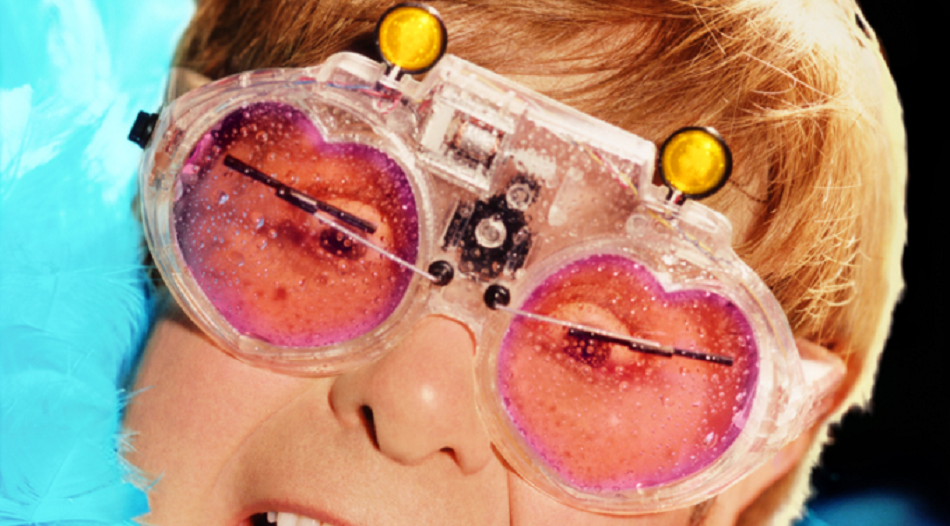 Being a glasses wearer myself, I have often thought about the different things that we could attach or modify to make glasses amazing and a must have, whether or not you have bad vision.

One of the things that I would recommend to whoever makes these things is something that everyone has thought about but never been taken seriously. I’m talking about windscreen wipers (the things on the windscreen of your car that get rid of the rain) on the frames of the glasses.

We’ve all had those moments when you had a long walk home out in the cold and rain, only to walk into a warm room and have your glasses fog up, making you temporarily blind. You’ve then had to take them off and wipe them on your sleeve or cloth and that is literally just too much effort.

Except maybe not as, erm, gay.

Another thing that I’ve been thinking about adding on is something that could project a heads-up display so you can do amazing things that were never thought possible with your regular eyes, such as see how many bullets are left in your gun. 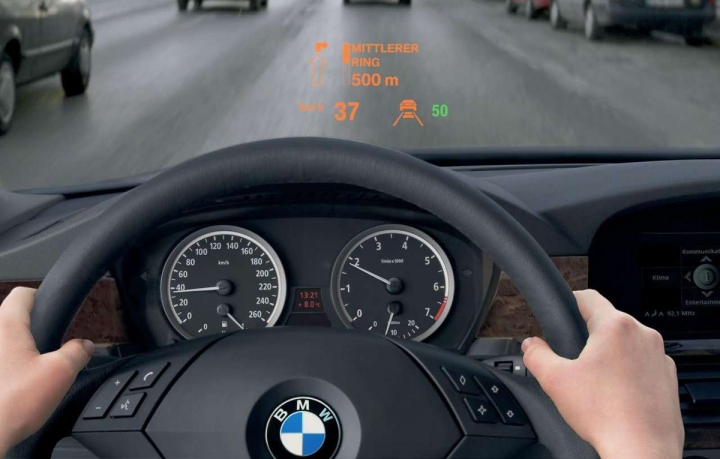 In all seriousness, maybe it could pick up and give you information on an unknown object in your vision. Say it could detect what you were looking at and give you a brief description of what it is. Or maybe even a pair that could pick up foreign languages and display the meaning of what they are actually saying because let’s face it, who can be bothered to learn another language? This could also work for the hard of hearing and just display subtitles couldn’t it?

Kind of like Siri, but perched on your nose.

There it is: how glasses could be amazing and from the future time where wars are fought on tablets. 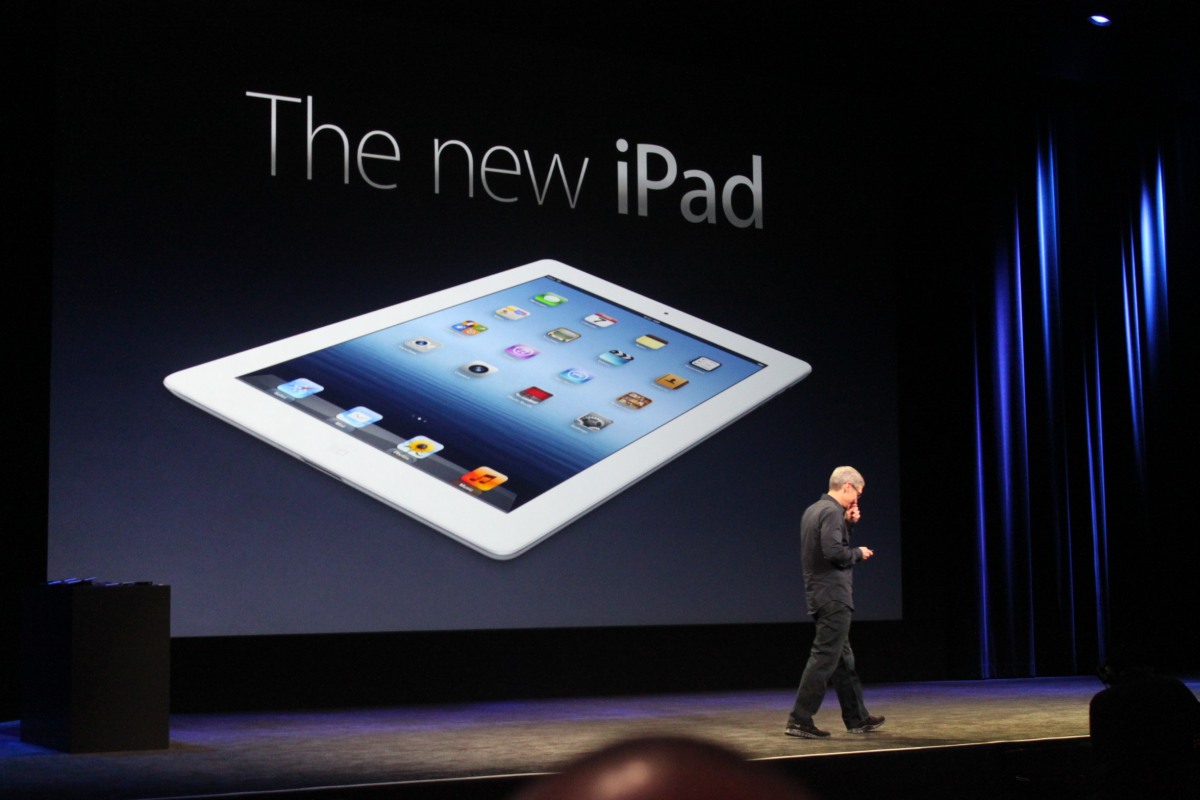 At a press conference in San Francisco today, Tim Cook unveiled Apple’s latest tablet, the new iPad. It has a 2048 x 1536 Retina display at 264ppi and an Apple A5X chip with quad-core graphics, probably using the same GPU as the PS Vita. The device comes with a toned-down Siri and support for LTE networks, along with a 5MP iSight camera on the rear that shoots 1080p video. There is most definitely a home button on the device, slightly thicker and heavier than its predecessor, the iPad 2. Pricing remains the same and it will launch worldwide, including in the United Kingdom, on March 16th. 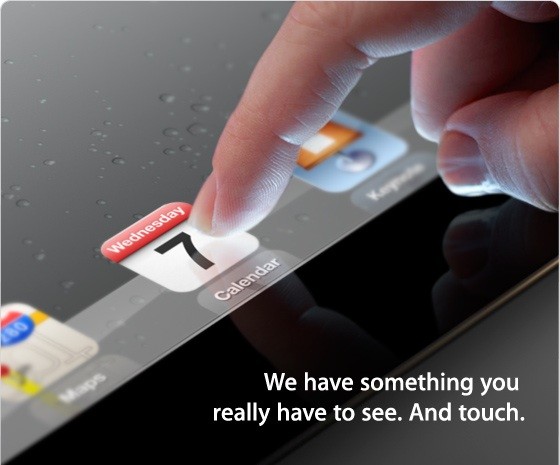 Liveblog! Liveblog! Get the news from Apple’s event as it happens! iPad? Apple TV? Find out here at 6PM GMT!

END_OF_DOCUMENT_TOKEN_TO_BE_REPLACED

Apple are set to release the next iPad at a San Francisco press conference tonight and the question running through every Apple lover’s mind is simple: what’s going to be different?