For the one true episode 014 of our now adolescent podcast, Xavier and Chris make up for lost time by talking about everything important since the Lumia 1020 happened. It turns out that this includes a fair bit about the 1020 itself, but our dynamic duo (sorry Henry) also trawl through news about its baby big brother, a new family of Droids from Motorola and Verizon with the Moto X launch looming later this week and HTC’s quest for profitability with One variants both big and small. Samsung, on the other hand, go full-on with the purple and Canonical decide that a crowdfunding campaign to make an Ubuntu phone with a sapphire crystal display makes perfect sense. There’s also a new BlackBerry leak if you’re into that kind of phone and Google’s new Nexus 7 and Chromecast streaming HDMI dongle thing.

Right click and save this link to download, and you can subscribe (and rate and review the show) using iTunes! Don’t fancy iTunes or use a different podcatcher? Here’s our RSS link!

It’s been a bit of a crazy week, best epitomised by John McAfee going mental. There’s also been a trailer for The Lego Movie, an Xbox 180 and even a new portrait QWERTY phone from NEC. Less excitingly, Samsung, Instagram and HTC all hosted events, while Nokia promised one in early July. As ever, Chris and Xavier digest it all so you don’t have to, and Henry calls in for the final seconds despite our plethora of technical issues.

We know what we’re going to see, with Galaxy and Ativ stuff having already been leaked and, in some cases, announced, but that’s not going to take away our liveblogging fun. Henry and I will be providing our usual dose of snark and sarcasm along with the news from Samsung’s London event, so join us for a magical journey (if IFA 2012 is anything to go by).

END_OF_DOCUMENT_TOKEN_TO_BE_REPLACED

Henry makes a triumphant return to the show after Chris and Xavier break the biggest story of the week, in that you can now subscribe to and rate us in iTunes and all other leading podcatchers! Do that now! Please! We beg you!

END_OF_DOCUMENT_TOKEN_TO_BE_REPLACED

What would a Digixav Podcast be without a serious discussion about songs that deal with adultery in all its various forms and hipster racing cars? Not episode 9, that’s for sure. This time Xavier and Chris talk about the Xbox One, PlayStation 4 and various facets of Samsung and HTC before delving into the more underground side of tech with chat about Jolla, the gold PorscheBerry and a game that comes with a free supercar as a pre-order bonus. Chris also keeps shouting “GEORGIANA STARLINGTON” and something about cream cheese bagels, while Xavier begins to formulate some Xbox and Glass app ideas for the folks at Bang With Friends. 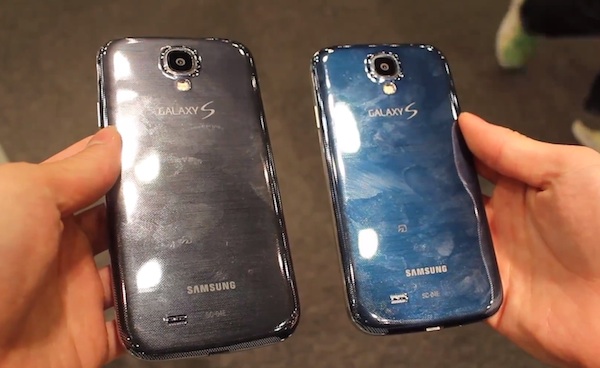 The Galaxy S4 is a phone from Samsung. Blue is a colour. If you combine the two, then you get a blue Samsung Galaxy S4, and that’s just what Japanese consumers will be able to snag today. NTT DoCoMo, also known as the network that gets all the cool things that Europe never sees, including Sony’s Xperia Tablet Z, is going to be the first network in the world to market this variant, named Blue Arctic, while the rest of the world is forced to stick with the Black Mist and White Frost models, although this probably won’t remain the case for long. Like the others and the Galaxy S III before it, however, the blue model is insanely reflective thanks to Samsung’s Hyperglaze coating that acts more as a fingerprint magnet and magpie attractor than anything else. There’s no sign of some of Samsung’s Galaxy S III colours such as Titanium Grey, Amber Brown and Garnet Red coming to the latest phone yet, but keep your eyes peeled and you may well see those – and a special Google edition with stock Android – in the not too distant future. It’s very fair to say that the official launch event for Samsung’s Galaxy S4 didn’t go down that well with, well, anyone remotely sane. We spoke about all the crap surrounding the phone’s unveiling (and the phone itself) in a special episode of the podcast, but it seems that Reliance Digital, a leading Indian tech retailer, has managed to do things even more horribly at a star-studded launch event. Bollywood actor Ranveer Singh was dragged onto stage and, over 7 months after it blew up and at a point where even PSY has moved on, performed a parody of Gangnam Style that was all about, you guessed it, the Galaxy S4. I would pick out a few of the most dreadful lyrics, but I feel it my duty to present you the whole ordeal in its entirety without any spoilers.

Over the past couple of days, I’ve seen numerous sites pick up on the story spread by a Carphone Warehouse press release that interest for Samsung’s new Galaxy S4 is so high that pre-registrations for it are 446% higher than with last year’s Galaxy S III. Many blogs, most notably VentureBeat and Pocket-lint, have sprung upon the opportunity to say that this is a sign that Apple is dying and Samsung is king and all that regurgitated nonsense, but they fail to point out any facts in these articles. The big one that is being ignored is that you can’t even pre-order the phone yet at Carphone Warehouse. The press release in question, published below, refers to pre-registrations, not pre-orders. With Samsung yet to confirm pricing for the phone, no retailer worth their bacon should be letting consumers order it yet, with Carphone Warehouse cleverly taking £29 deposits from interested parties or, for those less inclined to splash their cash, and crucially what they are most likely referring to when they give this figure of interest, email updates. Even if they were referring to deposits, these figures should be taken with a pinch of salt, and you should not trust any figures you see regarding the popularity and sales of the S4 until Samsung themselves give solid evidence.

Graham Stapleton comments on the launch of the Samsung Galaxy S4

Graham Stapleton, Chief Operating Officer at Carphone Warehouse, says, “The Samsung Galaxy S4 is huge news for anyone who already uses or is interested in getting a smartphone.

“Samsung has the timing spot-on with a late April launch, 4G coming to more UK networks this summer means that interest in new devices will be building considerably. We’re anticipating a massive amount of customer interest in this handset and are expecting our stores to be busier than at the height of the Christmas period. We are planning to extend opening hours at our larger sites to cope with the increased demand.

“The record breaking launch of the Galaxy SIII last year was always going to be a tough one to beat, but Samsung have pulled out all the stops with a dazzling new device that’s sure to inspire many people to make the switch to Android from other operating systems.”

The Samsung Galaxy S4 will be available from Carphone Warehouse on all major networks from 25th April. To register your interest, visit http://www.carphonewarehouse.com/new-samsung-galaxy-phone.