For years, Nokia has known that the best way to expand market share is to saturate every corner of it with a device. After an initial launch of just two devices in late 2011, Lumia devices are now available at seemingly every price point from £99 to £499, and one of the latest devices to join the range, the Lumia 720, sits firmly in the middle of this vast expanse, priced at around £249 unlocked. It follows on from the Lumia 710, which I reviewed last year and felt was a bargain considering its low price and high quality, but the 720 faces fierce competition from a sea of Android-powered handsets including diminutive versions of the top-selling flagships from HTC and Samsung. As such, is this mid-range combination of Windows Phone 8 and Nokia’s trademark hardware design worth your attention? Read on to find out.

END_OF_DOCUMENT_TOKEN_TO_BE_REPLACED

Nokia may have given us 41 million reasons to zoom in yesterday, but today Xavier and Chris bring you 1020 reasons to listen to the podcast, as our second episode this week focuses on Nokia’s new Lumia 1020 and its 41MP sensor.

Twelve. That’s a mighty large number, and it’s also the number of topics in the show notes for our return from yet another unintentional hiatus. While Henry lies in a field getting fried by the British heatwave, Xavier and Chris take cover in the depths of the night to talk about Apple’s mobile product lines and web ambitions, imminent announcements from Nokia and Motorola, new devices from Sony and HTC that are scaring Xavier’s wallet and leaked information about upcoming phablets from the Korean pairing of LG and Samsung. Chris goes on to wax lyrical about rap music while Xavier enthuses about The Last of Us while finding it horribly difficult (yet completely possible) to avoid spoilers. We also answer some user questions from Twitter, thanks to our wonderful listeners and #AskChris, which we’ve chosen to hijack.

END_OF_DOCUMENT_TOKEN_TO_BE_REPLACED

Vizileaks‘ recent flood of Nokia EOS leaks has made me very suspicious, and I believe that the only possible explanation for it all is that the leak is intentional and part of Nokia’s plan. Having spent some time analysing the images, tweets and blog posts from the user’s various online channels, I have expanded my theory and it’s not quite as far fetched as it may seem. END_OF_DOCUMENT_TOKEN_TO_BE_REPLACED

END_OF_DOCUMENT_TOKEN_TO_BE_REPLACED

The Verge’s Tom Warren, a reliable writer with regard to Microsoft news, reported that Nokia will be releasing the first ‘true’ PureView Windows Phone handset late in 2013. The device, codenamed EOS, will feature a sensor closer to that which appeared on the Nokia 808 PureView which was released last year. As well as this, it is reported that the device will signal the start of a new design cycle for the Lumia range. The device will be made of aluminium and will have squared edges, contrasting with the rounded polycarbonate body found in the current Lumia range.

The device is believed to be in the pipeline for AT&T in the US, and is expected to be released alongside another device (codenamed Catwalk) which will also have an aluminium body. It is clear that Nokia is moving away from the polycarbonate which they have used in their previous Windows Phone handsets. This change means that they will be in a much better position to compete with phones such as the iPhone 5 when it comes to size and weight, something that they have been unable to do thus far with the Lumia range, however this is in no way Nokia’s first phone of aluminium construction. The Nokia N8, the precursor to the aforementioned 808 PureView, was constructed out of the lightweight metal and was indeed available in a number of colours. With MWC coming up in a few weeks, we can expect to see more information coming out of Finland with regard to these handsets and Nokia’s upcoming Windows RT tablet. 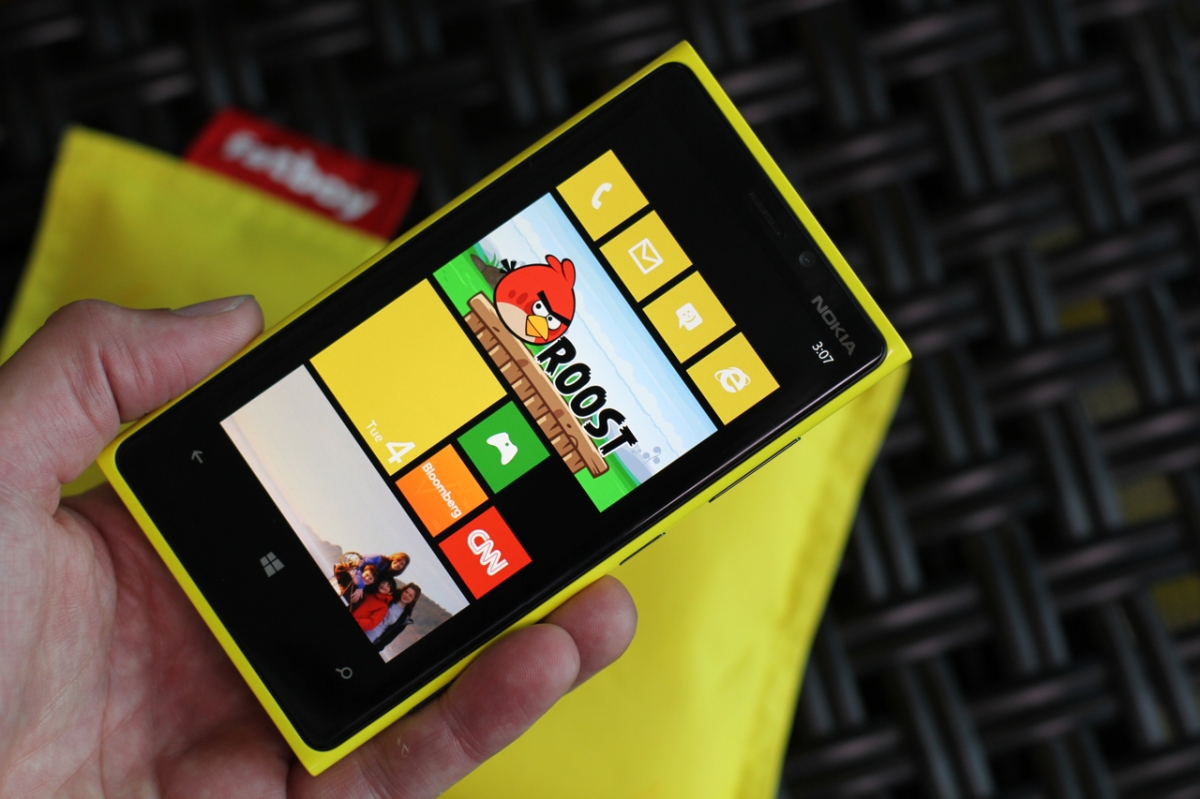 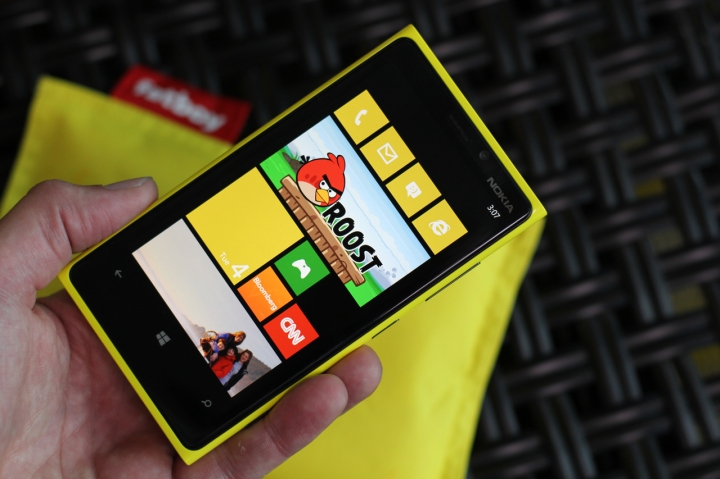 At an event in New York today, Nokia unveiled the Lumia 920, their first phone with the forthcoming Windows Phone 8 operating system. With a design that serves as a refinement to the Lumia 800 and 900 before it, the 4.5″ device has an 8.7MP PureView camera, a 1280 x 768 PureMotion HD+ display that Nokia claims to be its best ever, a 1.5GHz dual core Qualcomm Snapdragon S4 processor and a variety of polycarbonate body colours, including yellow, red, white, gray and black. While there is no sign of a cyan model, one that proved very popular with the 800 and 900, the 920 has a 2000mAh battery and will feature Qi wireless charging.

Windows Phone 8 has a native screenshot feature! Pressing the home and power buttons takes a shot and puts it in your pictures hub.

Kevin Shields demonstrated the device – and Windows Phone – with some gloves. We love him.

At Nokia’s Lumia unveil in New York today, The Verge got an interview with their CEO Stephen Elop. In the video below, Josh Topolsky probes Elop regarding their launch strategy for the 920 and 820, how Lumia 900 owners should feel after being told that their devices were obsolete and would not get Windows Phone 8 just months after launch and whether the PureView branding is being diluted with the 8.7MP sensor in the 920, compared to the 41MP 808 that pioneered the branding. Elop’s responses in the interview are intriguing, and you can watch the video below. 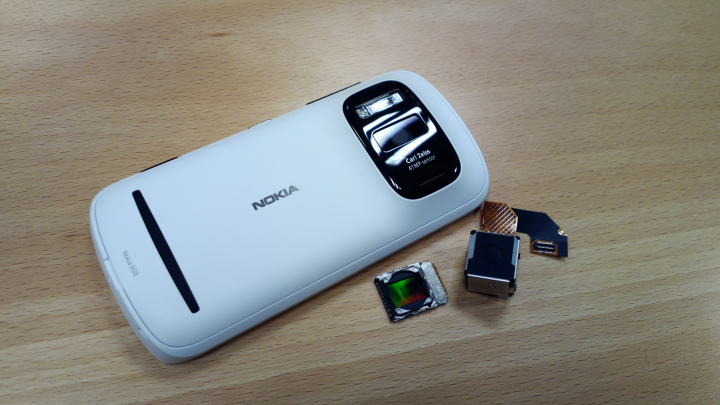 Remember the Nokia 808 PureView? Announced at MWC, the Symbian device has a 41MP camera that is more than a marketing gimmick. Now, with its launch coming up in the next couple of months, Nokia has released a promotional video on YouTube – shot entirely on the phone itself. We’ve already seen how phenomenal the shots can be, and we can’t wait to go hands-on. Watch the video below, and marvel at the camera over on the galleries at My Nokia Blog.